Home News Fake News Is A New Virus Without A Cure Fake news is as much of a virus as COVID-19–but deadlier in different ways, as Americans are about to find out.

And if the cure for coronavirus is elusive, scientists will have an impossible time finding any cure for fake news with the high-tech cat out of the bag, for good.

Those obvious Russian-linked Facebook ads of 2016 are already technological dinosaurs. Today, with Americans in the throes of protests and riots, it’s all about controlling viral networks.

And the average American’s lie-detecting ability is most likely sub-standard.

Social media giants are in a full-on war with fake news, and apparently losing, on multiple fonts from fake cures for the coronavirus to anti-vaccination propaganda and 5G conspiracy theories.

And now, a new front has been opened, and it’s likely more dangerous than the pandemic itself.

As protests continued for a tenth night across the U.S. cities, with demonstrators peacefully gathering to protest police brutality in the aftermath of the death of George Floyd, the media space is being bombarded with news–much of it completely false.

In one of the most recent incidents (which accrue by the second), Twitter has removed an account deemed to have incited violence and claiming to belong to a national ‘Antifa’ organization. The account, which included the Antifa logo, posted an ‘alert’ reading ‘Tonight’s the night, comrades.’ 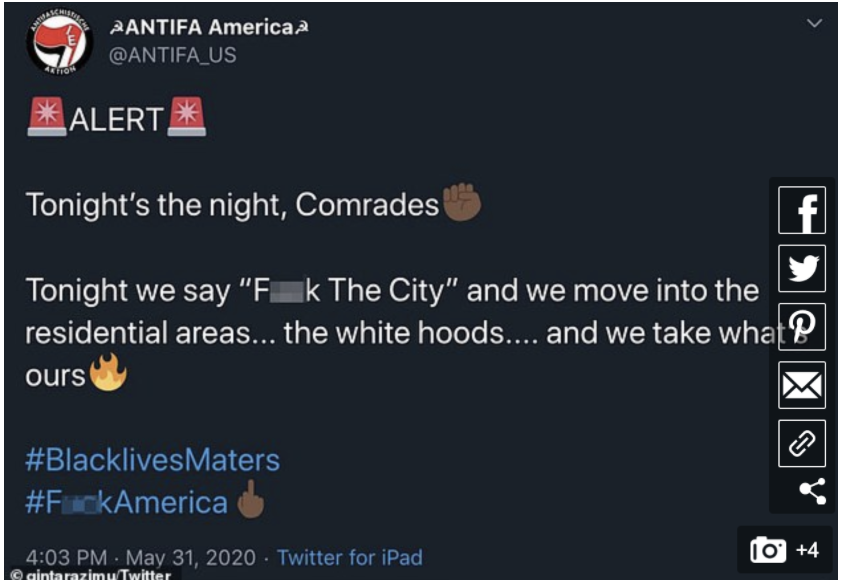 President Trump pledged last week to designate Antifa a terrorist organization, alleging that the group is behind the looting and arson in dozens of American cities.

The truth is somewhat different, though. The account Twitter removed claiming to be an Antifa group was actually created by the white supremacist group “Identity Evropa”.

Two hashtags that trended worldwide falsely claimed that there was a “cover-up” or a “blackout” of protests in Washington, D.C, appearing to insinuate that protesters have been silenced by an internet blackout. 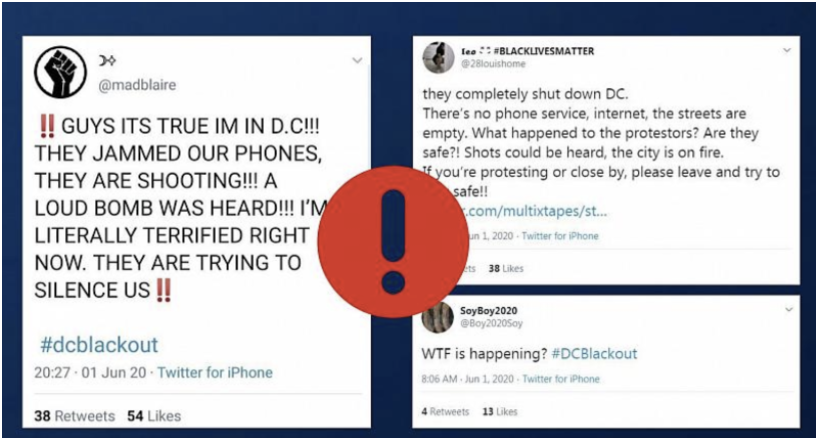 Despite the lack of evidence of a blackout, the hashtag garnered nearly 800,000 tweets from 35,000 unique accounts in a matter of hours. Panicky messages about a blackout also spread on Facebook, Reddit, and later on Instagram, as well.

Twitter said it suspended several hundred accounts and is investigating the viral spread of the hashtag, which it said was boosted by “hundreds of spammy accounts,” with zero or few followers.

Also, it appears that viral text messages of screenshots of doctored tweets have circulated throughout the country. Some of the false text messages claim that extremist groups are plotting to move into residential areas this week.

A similar text message scam also surfaced a few months ago regarding the coronavirus, which US officials blamed on Chinese bots.

As far as real people and not bots are concerned, Florida Congressman Matt Gaetz had his tweet hidden due to a breach of rules against the glorification of violence. Congressman Gaetz asked, “Now that we clearly see Antifa as terrorists, can we hunt them down like we do those in the Middle East?”

And now, Twitter is monitoring more closely President Trump’s activity on the platform, recently removing an account that included the hashtag #QAnon, that the president retweeted a couple of days earlier.

Despite what many may assume, the term “fake news” wasn’t really coined by President Trump. In fact, it pre-dates the internet itself by a long shot.

A century ago, media outlets in the U.S. were reporting ‘fake news” about products paid for by patent medicine pushers: snake oil salesmen, in other words.

And it goes back even farther than this, all the way to the Roman Empire, a time when information traveled at a much less dangerous pace.

But today, all it takes in a single moment (and a viral network) to incite violence–or, indeed, to commit a war crime. That’s how it would have been in the 1990s, when media was a crucial tool in the wars in ex-Yugoslavia and Rwanda. There are quite a few instances in which the media could have provoked war crimes of reporting in which lies led to killing someone just because they saw something on TV or read it in the paper. Quite a few journalists were tried and sentenced for war crimes.

Fast forward to 2020 and criminal inciting to violence has been diluted because of its viral nature, and no one will be held responsible.